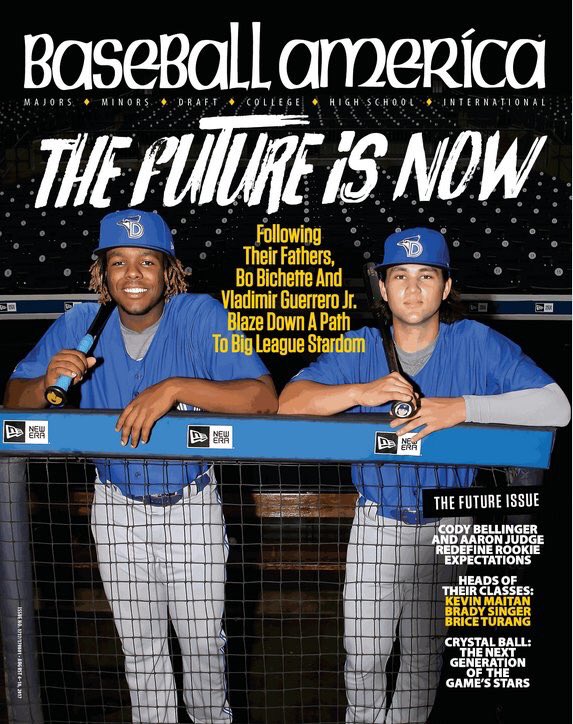 To the surprise of very few, Blue Jays prospects Vladimir Guerrero Jr (3), and Bo Bichette (8) have climbed to the Top 10 of Baseball America‘s Top 100 Prospects list.

Braves prospect Ronald Acuna headed up the rankings, while the Angels Japanese two-way sensation Shohei Otani nudged Guerrero to #3.  BA staffers admit that it’s been some time since three players have caused such internal debate about who is first overall.

Anthony Alford (60) and Nate Pearson (91) joined Guerrero and Bichette in the Top 100.  For Pearson, inclusion in the Top 100 capped off a remarkable year for the 2017 draftee.  His fastball garnered a 70 ranking on the 20-80 scouting scale.  Jason Parks, now of the Cubs, gave this primer on FB grades for Baseball Prospectus a few years ago:

While Pearson only received slightly below or above average grades for the rest of his repertoire (Curve 45; Slider 55; Change 50; Control 45), that 70 stands out, and buys him time to develop his other pitches.  When you consider that Pearson was considered a risky late first round to early second round pick less than a year ago, he’s leapfrogged a considerable number of other prospects.  Pearson feels quite justified in going the JuCo route:

Everyone told me going juco was a big risk even my Dad. Only you can tell your self what you can and can’t do. My Dad and I joke about it now. The coaches at CF helped tremendously. #betonyourself https://t.co/3zD8sLNuZN

The Blue Jays limited Pearson’s workload this summer, but he was utterly dominant in Vancouver.  He didn’t allow a run until his 6th innings-limited start – he didn’t even allow a runner past 2nd until that outing.  His final start of the season was a lights out effort in Game 1 of Vancouver’s semi-final vs Spokane.  Pearson allowed 1 hit over 4 innings, fanning 10.

Before we get to Guerrero, Bichette, and Alford, here’s Parks on Power Grades:

The Grades for Guerrero included 80 for his hit tool, 70 for power, 40 for speed, 40 for his fielding, and 55 for his arm.  This would seem to lend support to the idea that he’s safe at 3rd Base for now, but a move across the diamond will be in his long-term future.  As someone who saw him in person and online last year, I’ve always liked his reactions to balls hit in his direction; he has excellent hands and footwork, but not necessarily the quickness to get to balls at the edge of his range in a timely manner.

Bichette received a 70 for his bat, 60 power, 50 for speed, 45 for fielding, and a 60 for his arm.  The arm and fielding grades are a bit of a surprise:  I found that Bichette showed sure hands, turned the double play well, and demonstrated increasing range as the season progressed, but the arm strength seemed to be lacking a bit. Bichette may not be possessed of blazing speed, but he’s a smart and aggressive base runner.

Alford’s grades slipped a bit, as did his ranking.  He was given a 60 for his bat, speed, and fielding, 50 for power, and a surprising 40 for his arm.  Alford may not be Amos Otis in CF, but he reads balls well, chases down hits to the gap effectively, and gets rid of the ball quickly.  There has been a little concern that his power has yet to develop, as his swing does not have a lot of loft to it.  Alford does work the count very well, and barrels a number of balls just the same.  His 60 grade speed seems a little on the low side; Alford does have what can be considered game-changing speed on the base paths, but it hasn’t translated into high stolen base totals (19/22 last year).  Then again, given his injury history, the team may not want Alford stealing all that often.

This is a good body of work for the Toronto farm system.  There are clearly three levels of talent represented –  almost ready (Alford),  maybe a year away (Bichette/Guerrero), and a few years away (Pearson).  Perhaps next year we may see Eric Pardinho or Logan Warmoth sneak onto the back end of this list.