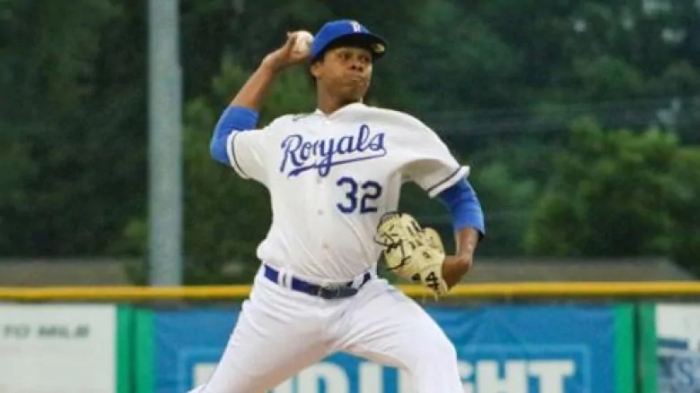 It was a bit of a throw away line, if anything.

Towards the end of a 40-minute interview with Blue Jays President/CEO Mark Shapiro fourteen months ago, I was gathering my notebook and recorder as it was becoming obvious this busy guy had places to go and people to see.

As I was packing up, we were talking about how the job of a General Manager has changed in this day and age of analytics.  Thinking back to a Baseball Prospectus essay I had read several years ago about how daunting a task it is to assemble a cost-effective bullpen these days with the volatile nature of relievers, and I opined as to how I thought piecing a bullpen together is a GM’s most challenging task.

Without hesitating, Shapiro responded, “I think developing starting pitching is.”

With that in mind, the Blue Jays’ drafting of RHP Elvis Luciano, the Royals’ 9th ranked prospect, despite Luciano not having pitched above Rookie ball, is easy to understand.  Even in this era of multiple reliever bullpens and the Opener, the Blue Jays are still laser-focused on the group of pitchers who give them the bulk of their innings every year.

Alex Duvall at Royals Farm Report gave us a glowing report on the 18-year-old Dominican:

You guys, I am in love with this kid. His arm action is smooth, his fastball is electric with room to grow, and that slider…oh my gosh. I’m not actually going to go there, but I watched two minutes of this kid pitch and thought to myself: “This kid has the highest ceiling of any pitcher in the Royals system.”

“He’s a power arm that keeps getting better. He’s been up to 97 recently and competes really well. We feel like we have a young starter with a big ceiling. Seems to keep getting better and heading in the right direction.”

Blue Jays GM Ross Atkins said the team had done their homework on Luciano, and when he was still available when it came their turn to pick, it was a no-doubter.  He told reporters, including the Toronto Sun‘s Rob Longley:

“We wouldn’t have taken him if we didn’t think he had the stuff to do that,” Atkins said of what seems an unlikely prospect. “Elvis is an exciting young arm that we’ve done a lot of work on and we feel that any time you can acquire someone that has a significant chance to be a major league pitcher based on our projections and scout looks, these types of attributes are hard to acquire.”

So, the Blue Jays have landed themselves an 18 year old who already throws in the mid-90s, commands (to varying extents) three pitches, and has a boatload of projection remaning.  You do not find these arms available every day, and even though he’ll have to stay on the 25-man roster for a year (unless, of course, the Blue Jays can work out an arrangement with Kansas City), when you’re not likely to compete this season or next, you have room.  Luciano turns 19 in February – he’s a year older than Eric Pardinho, who pitched in the Appy League as Luciano did this year.

Luciano has a clean, athletic delivery, with a consistent arm slot.  His slider has some late bite to it, while he’s still developing a feel for his change.  Baseball America‘s report on him after 2017:

The D-backs saw Luciano throw just twice before snapping him up for $85,000 in the fall of 2016. They liked his heavy fastball, the spin on his breaking ball and his feel for a change-up. Luciano pitched in 2017 at the tender age of 17, but he is advanced beyond his years. He has an athletic delivery, a loose arm, a good feel for pitching and an unfazed demeanor on the mound.

At the same time, in their draft preview, BA felt that selecting Luciano probably represents too much of a risk:

Luciano is in no way ready for a big league job and the lost development time would hurt him. But he is one of the more promising prospects available because a renegotiated contract has made him eligible as an 18-year-old with no experience above short-season ball.

For many, the question is why would the Blue Jays gamble on a player who hasn’t even pitched at full season yet?  The answer is likely to be found in the fact that with Rogers finally having given their blessing to a full-on rebuild, the team can afford to carry Luciano on the 25-man for a full season.  The team will no doubt not use him in a regular role, likely relying on the QEW shuffle to bring in arms from Buffalo as needed.  Luciano is a roll of the dice:  his upside is as big as his risk.  But that upside might have been the biggest one in the whole Rule 5 draft.  This wasn’t a guy whose development clock ran out; a voided contract in his rookie year made him eligible this year.

Luciano has a pitcher’s build at 6’2″/184.  He’s struck out almost a batter per inning over three minor league seasons, and his 13.3% whiff rate was second best in the Appy League.  As BA noted, the chances of him sticking with the Blue Jays are very low, and that’s a realistic assessment – the last time a team selected a player out of rookie ball was in 2013, when the Brewers took Wei-Chung Wang, who didn’t stick.  Still, if there’s a time for the Blue Jays to make this type of gamble, 2019 would be it.

The Blue Jays lost lefty reliever Travis Bergen, taken by the Giants with the pick before Luciano, and Markham’s Jordan Romano, taken by the White Sox with the third pick and then traded to the Rangers.

Bergen has been one of the best relief arms in the system the past two years, closing out W’s for championship teams in Vancouver and New Hampshire.  He also has a lengthy injury history, which the Blue Jays were probably hoping would dissuade teams from taking him.  Bergen throws in the low 90s, but his command and ability to sequence are his strength.  Few pitchers in the organization could throw a back foot slider to a RHH like he did.  A 7th round pick in 2015, Bergen pitched only 28 innings over his first pro seasons.  More than anything, the injuries meant he ran out of time as a prospect.

Romano has been a great fan of this site and its predecessor since he missed the 2015 season due to Tommy John surgery.  Since that time, he’s steadily moved up the ladder, as the Blue Jays transitioned him from reliever to starter.  He won his first 8 decisions with New Hampshire, and was the starting pitcher for the East in the Eastern League All Start Game.  Armed with a heavy mid 90s fastball and nasty slider, Romano’s change-up made great strides this season, but obviously not enough to convince the Blue Jays to put him on the 40-man roster.  If he’s moved to a multiple-innings relief role, Romano could be successful with his two primary pitches.

Best of luck to them both.  I’ve seen a lot of them over the years.