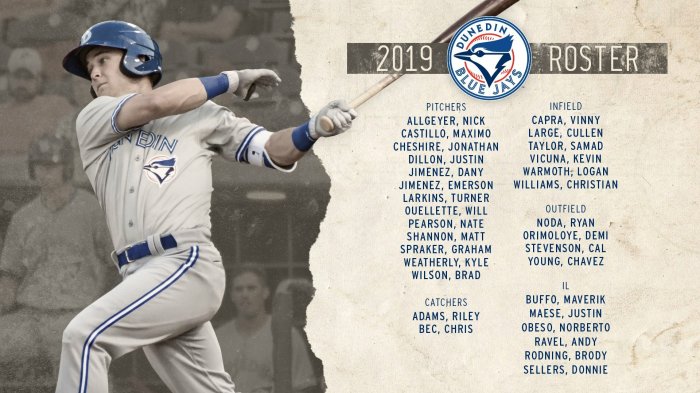 Top prospects Nate Pearson, Logan Warmoth, and Chavez Young are featured member of the D-Jays roster.  Pearson’s 2018 was limited to just over an inning due to injury, and he is likely being kept in Florida to be close to the team’s medical staff as a precaution, and should be in New Hampshire before long.  Warmoth, the club’s 2017 1st rounder, had a disappointing 2018 on both sides of the ball, and is repeating High A.  Young drew raves as the only player with 40+ steals and 50+ extra base hits with Lansing last year, and has worked his way onto the prospect radar.

Joining Warmoth in a return engagement in Dunedin is C Riley Adams, who has promising athleticism, but struggled at times last year.

Dunedin’s strength will lie in its Outfield, with athletic Canadian Demi Orimoloye (who came over from the Brewers in the Curtis Granderson deal last summer), OBP King Ryan Noda, and Cal Stevenson, who skips Vancouver and Lansing after a breakout summer in his pro debut last year.  Noda likely will see time at DH and at 1B, spelling off Christian Williams.

Cesar Martin, who managed the last two seasons at Lansing, moves up to Dunedin this year, joined by his hitting coach Matt Young, and longtime Jays MiLB pitching coach Jim Czajkowski, who moves up from Vancouver.  Of note on the Dunedin coaching staff is Analyst/Coach Jake McGuigan, who was a video assistant at Bluefield.  A former player at Harvard, McGuigan’s expertise lies in his ability to interpret the technology the team is using, and translate its results to the players.

With the renovations at the former Florida Auto Exchange Stadium taking place, the D-Jays will be playing their home games a short drive away at Jack Russell Stadium in Clearwater.  Depending on the makeup of the other teams in their division, the D-Jays on paper look to be a borderline playoff team – much will depend on their rotation, and the success of their OF.