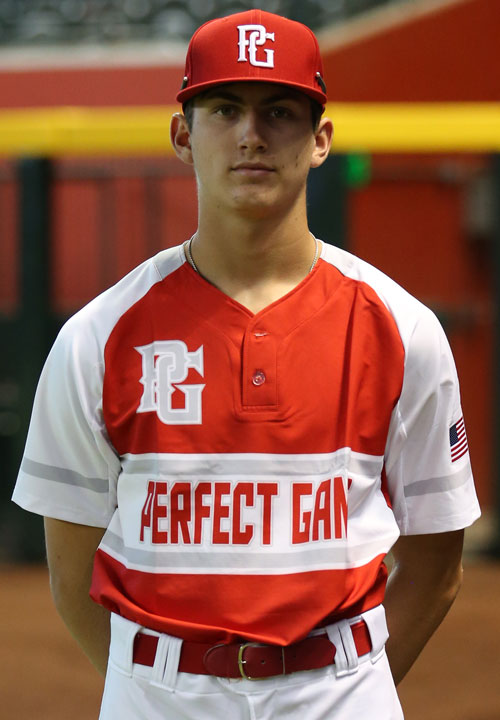 Tyler has a really loose and easy swing with a line-drive plane and a bat that stays through the zone long, and leaves with plenty of loud pop off the bat in which the ball drives all over the field. He only has a 45 grade power tool, and doesn’t show much warning track power in-game – but he has an impressive 60 grade hit tool with hands that can get to any ball in the zone and drive it wherever with some zip on it. His legs don’t explode, but they stay quiet and avoid making any unwarranted movement pre-pitch. He has a really good grasp of the zone when in the box, and won’t give away at-bats, while making the pitcher work more than wanted. He won’t ‘wow’ you on the box score but will quietly go one for three with a 95mph ‘piss missile’ line-drive over the pitcher’s head and a seven-pitch walk after fouling off one or two borderline strike three pitches. His work won’t always show up on the statsheet but he’ll always make an impact on the game in some way.

He’s a long-limbed, dream built athlete with 30 grade speed and the possibility of some loss in speed if he continues to play catcher in high school and at UCLA. He’s had numerous 60 times clocked at 6.86, and 7.00. He is far from a hot commodity on the basepath and won’t make much impact on the game via his legs.

An athlete behind the plate – he should, and will stick at catcher in the future. He has a 55 arm that sits in the 1.85-1.95 range and works in the mid-80’s range behind-the-plate. It’s been said that he’s gotten up to 90 on the bump in a high school game. His hands work well when receiving as he presents a clear target and will steal pitches throughout games in a low-squatting form that helps him excel in the running game and blocking in the dirt.

He’s a day-one talent similar to Jonathon French (2019 day-three draftee who went late on day-three) who could go in the first or second round if not for a high bonus demand. Tyler should be a mid to late first round pick because of his impressive hit tool in a weak position and his skills behind-the-plate. He’d be the best prospect in many organization’s systems once drafted.

He has a similar swing and comp to D.J LeMahieu of the Yankees, both have tall builds and loose swings that are carried by really good usage of their hands and little to no explosion in the hips. D.J is listed as being three inches taller, but Soderstrom still hasn’t completely grown and could outgrow the catching position and move to third or second base.