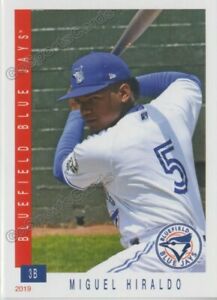 Cavan Biggio certainly made a splash with the big club this summer, but another Blue Jays 2nd Baseman of the future may be found ready to burst onto the full season scene next year in Miguel Hiraldo.

Originally signed as a SS in 2017, the 5’11” Hiraldo is listed at 170 lbs, but our good friend John Calvagno of Notes From the Sally puts him more at 210, and several reports have called his build “stocky.”   Scouting reports at the time of his signing suggested a move to 3rd, and the Blue Jays had him take slightly more of his reps at 2nd at Bluefield this year.

Hiraldo’s carrying tool is his bat.  He generates considerable torque and bat speed, and shows a good feel for the barrel.  He can chase at times, but he projects as a 20+ HR guy at the big league level, possibly even more if he can create more of a launch angle – his swing is more of a line drive-type at the moment.  As an 18 year old in the Appy League this summer, he more than held his own, slashing .300/.348/.481.

Hiraldo possesses average speed, and on defense, he shows decent hands and a strong arm.  Reports are that he moves well for his size.

Hiraldo is the latest addition to the considerable up-the-middle depth the Blue Jays have been stockpiling.  He figures to continue to get reps at both 2B and SS next season, as the Blue Jays appear to be trying to develop many of their prospects as versatile, multiple position guys.  A decent year at Low A (or higher) next year might increase his potential trade value as the club tries to transition some of that depth into pitching help for the 25-man roster.