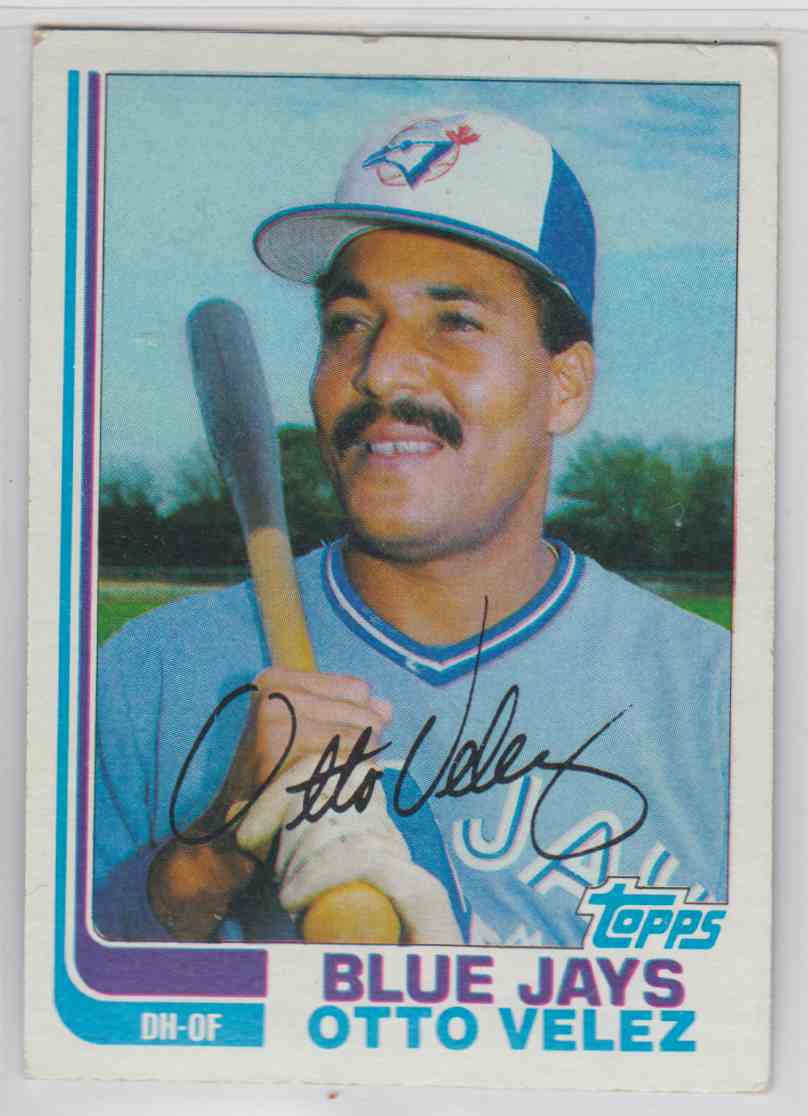 The 1977 Toronto Blue Jays were a dismal outfit on the field, finishing dead last in the American League East, 45.5 games back of the Yankees, with a 54-107 record.  But Toronto fans, excited by the arrival of the expansion team, drew 1.7 million fans to makeshift Exhibition Stadium, good enough for 4th in the league.

Doug Ault became an instant fan favourite by slamming a pair of Homers in the snowy April debut, but Otto Velez gave Blue Jays fans the most to cheer about over the course of that first month, posting an incredible .442/.531/1.397 line, taking home AL Player of the Month honours.

Signed by the Yankees in 1969 from Puerto Rico, Velez steadily hammered his way through the minors, and after posting a 1.012 OPS, including 29 round trippers and 130 walks, for AAA Syracuse in 1973, he made his MLB debut that September, collecting his first hit off of Tigers’ ace Mickey Lolich.  Over the next three seasons, Velez was unable to crack a lineup that featured Roy White, Mickey Rivers, Lou Piniella, and Paul Blair in the outfield.  He did make 3 plate appearances as the Yankees were swept in the 1976 World Series by Cincinnati, but after Yankees owner George Steinbrenner signed Reggie Jackson that off season, Velez’ days with the Yankees were numbered, and the Blue Jays made him the 53rd player picked in the expansion draft they shared with expansion cousins Seattle Mariners.

While Ault, batting clean up in that Opening Day lineup, was knocking out those two long balls, Velez, who followed him in the batting order, reached base three times, with a pair of singles and a walk, adding a stolen base.  The highlight of the month for Velez came a week and a half later, when he exacted revenge on New York by laying waste to Yankee pitching, going 9-15 for the four game series, with a pair of Home Runs and 8 Runs Batted In.  For the month of April, Velez posted 8 multi-hit games.

As April turned into May, Velez’ bat turned frigid.  As the Yankees had discovered, Velez could hammer southpaws, but right-handed pitching gave him fits, and like so many sluggers of his ilk, he had trouble with breaking balls.  Word got around the AL quickly, and Velez saw fewer and fewer fastballs as the season progressed.  Buoyed by that torrid April, Velez posted decent (.272/.369/.498) first half numbers, but his second half was a woeful .222/.359/.376.  Manager Roy Hartsfield, like the Yankees, discovered that Velez was weak defensively,  and given his struggles with righties, in the second half platooned him with veteran Ron Fairly, one of the slowest players in MLB history, playing in the next-to-last season of a 21 year career.

Still, Velez managed to play in a career high 120 games that season, but he became a part-time player after that.  His most productive season was in 1980, when he slashed .269/.365/.487, with 20 HRs and 62 RBI.  In May of that season, he hit for a Home Run “cycle” in a doubleheader with Cleveland, hitting a grand slam, solo, and one-run shot in the opener, and a two-run blast in the night cap.  Like just about every Blue Jay in 1981, Velez had his worst MLB season, and he was released in September of 1982, after appearing in only 28 games.  He signed a minor league with the Indians the following season, but his MLB career was over after he batted .080 in 25 ABs.   Velez finished his playing career after a season in the Mexican League in 1984.

Wall-to-wall, daily coverage of MLB teams in 1977 was non-existent.  In Canada, we were limited to the Wednesday night CBC telecasts of Expos games, and CTV’s broadcast of the Jays on the same night.  So, we didn’t get to see a lot of Velez that April, but he seemed to mash whenever we did get a glimpse of him that month.  Few players in Blue Jays history have had a month to match Otto Velez’ magical April.

Here’s an Otto Velez story to leave you with….