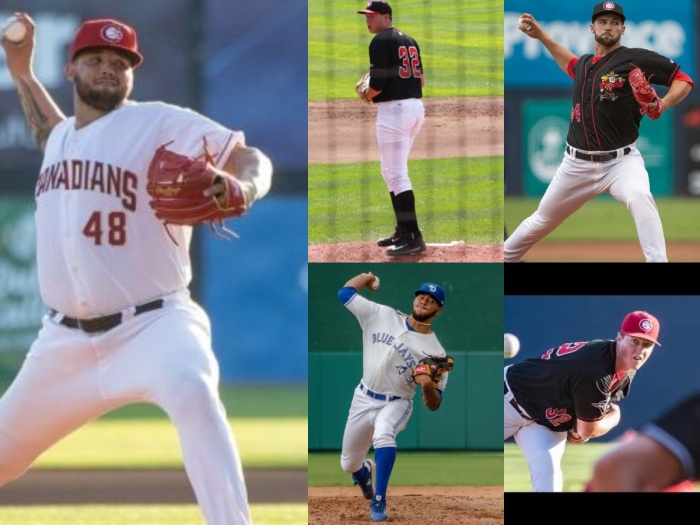 Let’s fast forward the calendar a couple of years…..it’s the end of May, 2023, and the Blue Jays, flush off taking two of three against the Orioles and 2022 MVP Adley Rutschman, have an off day before heading to Detroit to take on the vastly improved AL Central-leading Tigers, and reigning Cy Young winner Casey Mize.

Toronto has completely overhauled its starting rotation over the past two seasons, starting with top of the rotation ace Nate Pearson.  Pearson made his debut in the Covid-19-shortened 2020 season, and has been handled carefully, but the wraps have been taken off, and Pearson led the AL in strikeouts last year.  Following Pearson in the rotation is Simeon Woods Richardson, now viewed as the centrepiece of the Marcus Stroman deal.  SWR made his MLB debut last July, and with his command quickly fit into the Toronto rotation.

The middle of the rotation is anchored by 2019 1st round pick Alek Manoah.  Manoah has had troubled finding consistency with his off speed pitches, but his fastball and frame have allowed him to log a lot of innings since breaking camp with the team at the end of March.  Following Manoah is 2018 draftee and fellow workhorse Adam Kloffenstein, who joined the team in May after beginning the year with AAA Buffalo.  Bringing up the back of the rotation is invisiballer Joey Murray, who had given up some contact since joining the team last season, but he has shown a knack for getting the ground ball out when needed.  Murray was pushed this spring by 2020 1st rounder Emerson Hancock, 2018 IFA Sem Robberse, and 2019 2nd rounder Kendall Williams.

The bullpen has been one of Toronto’s strengths.  Closer Sean Reid-Foley, moved to the pen in 2020, has been lights out with his repertoire pared down to two pitches.  Used exclusively in 9th inning, three-out situations, SRF no longer loses his delivery (and the strike zone) during longer stints like he did when he was a starter.  Setting up Reid-Foley are fireballers Yennsy Diaz and Patrick Murphy, both of whom have seen their already impressive velos tick up in a bullpen role.  Anthony Kay and Trent Thornton provide support from the left side in long relief.

Yes – we left out off season acquisition Hyun-Jin Ryu. Hopefully, he will still be a rotation stalwart three seasons from now.

It was more fun to go with a homegrown rotation in 2023 (we’ll label SWR that, because he spent several seasons in the Jays system).